Why are people obsessed with coupling caps?

Capacitors are probably second on the list of snake oil science peddled to audiophiles, trailing only wire in lack of actual relevant data (either controlled listening tests or electrical tests showing effects above plausible audible thresholds) to back up remarkable sonic claims by their sellers and eager buyers. What elevates these claims to “remarkable,” and thus demanding VERY solid proof before being taken as anything beyond fantasy?

First, a historical aside: the cap craze really took off in the 1970s with (as usual) Jean Hiraga at the origin. The publication of Jung and Marsh’s “Picking Capacitors” article in Audio brought the issue to the attention of mainstream US audiophiles, despite having no relevant experimental data for coupling caps nor any actual listening data to back up the Fear Uncertainty Doubt that the article was meant to create. The article did serve the purpose of launching several boutique capacitor companies, peddling expensive remedies to the newly “discovered” audiophile plague.

Later publications by Cyril Bateman are often cited as plausibility arguments for claimed (but not demonstrated) audible differences between different capacitors used in coupling applications. However, the Bateman articles use test conditions that are more suitable for crossover capacitor applications than coupling, and indeed in speaker crossovers, some of the capacitor imperfections can edge toward audibility. But for coupling caps, Bateman’s analysis is largely irrelevant.

And then a sociological aside: one major reason for the wire craze is that it takes absolutely no knowledge to swap wires, just a credit card. In fact, knowledge here is a detriment to the “fun” of applying exotic “solutions” to problems that only require simple and inexpensive solutions. Capacitors are not far behind- there is the additional barrier of having to solder, but beyond that, it takes no knowledge to read internet reviews, whip out a credit card, and swap in an expensive component with a good story. Follow it up with uncontrolled listening with a pre-existing bias and no actual knowledge to clutter up things, and you have a wonderful story to tell people on the Internet.

When I built a little box which allowed the ears-only comparison of a cheap electrolytic cap and a very expensive Teflon film cap used for coupling (see the Bastard Box section of my article “Testing One, Two, Three” available here), I couldn’t hear a difference. Nor could any of the audiophiles who tried the Box themselves. Perhaps we’re all deaf to the claimed obvious differences? Or maybe there just aren’t any. In this short post, I’ll look at some objective evidence.

First, let’s do a quick technical analysis. A coupling cap by definition has impedance (dominated by its reactance) which is small in magnitude compared to the load impedance. Putting some numbers on that for a typical case, we start with a load impedance of 100k, not atypical for a tube or FET amp stage. A typical value of coupling capacitor for this situation is 1uF, giving an f3 of about 1.6 Hz. Note that this is more than a decade below the lowest audio frequencies of interest. At midband (1 kHz), a 1uF capacitor has a reactance of about 160 ohm, which certainly fits the criterion of “small compared to 100k.” So only about 1% of the signal voltage would appear across the cap.

The reference cap is a 1uF 600V V-Cap Teflon super-expensive (about $300 each) audiophile-grade whatever. The other cap is a pair of 2.2uF 35V cheap aluminum electrolytics connected in series, positive-to-positive to form a bipolar electrolytic. Total cost, about 25 cents. The caps were between the 50R source unbalanced analog output of an Audio Precision APx-515 set to 5V out, and the AP’s unbalanced 100k input. I set the frequency to 18Hz, just to keep the third harmonic separable from any 60Hz pickup.

Yup, they overlay one another perfectly, with one exception: the larger size of the V-Cap means more hum pickup, nearly 20 dB worse, in fact (reversing the cap connections had negligible effect). So at least for low frequencies, there’s no performance penalty to spending about 1000% less and perhaps even a bit of advantage.

What about at midband? After all, everyone knows that electrolytics sound murky, right? Could it be the claimed ESR or dielectric absorption, or dissipation factor? From a technical point of view, none of those make sense since the ESR is a vanishingly small contributor in the voltage divider equation, DA is a linear phenomenon which is a worry for DC applications (this isn’t), and DF is likewise buried in the voltage divider, even in severe cases. But what does experiment tell us?

Let’s up the frequency to 1kHz, smack in the midrange, where the capacitive reactance is several hundred ohms, even smaller with respect to the load impedance.

Huh, they still overlay except for the additional hum pickup from the V-cap. There is no distortion advantage whatsoever for the $300 capacitor compared to the 25 cent capacitor in a coupling application. Perhaps those pig-headed engineering types are right about using dull things like voltage divider equations and Maxwell’s equations to select components?

Now, I can hear the sniffy dismissal from Fourier deniers: “These are static signals and not a difficult test. Music is much tougher.” Well, first, bullshit, the signal is constantly changing, and in half a millisecond, it sweeps every value between +7.07 and -7.07 volts. Hardly “static.” But hey, just because it’s so easy to do, lets throw a really complex signal at it, like… oh, I dunno, maybe a 42 tone cluster? 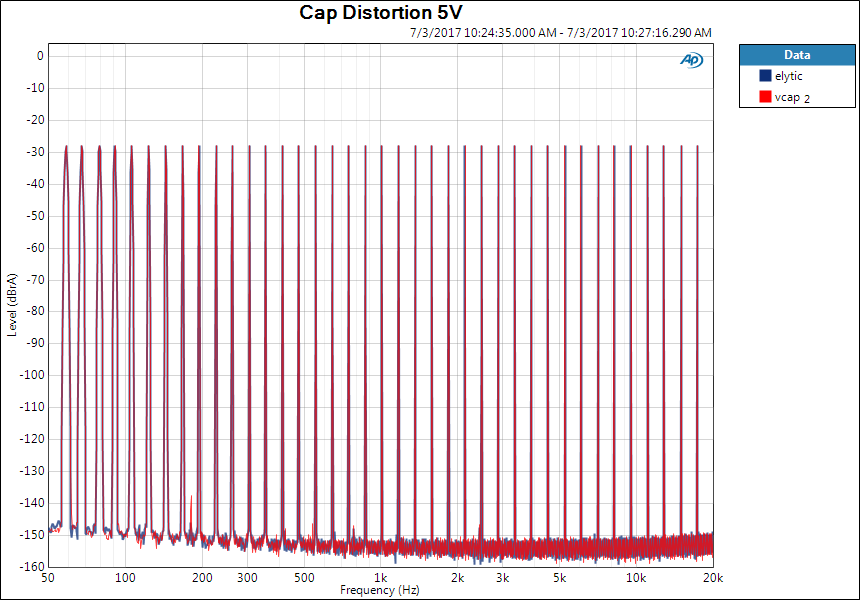 Surprise, surprise, there is not a damn bit of difference except, again, for more noise pickup by the expensive cap. No garbage between tones, no intermodulation.

Now, there may be reasons of reliability to use a film cap instead of an electrolytic for coupling, but there is nothing in the electrical signal which can benefit and as we can see, the larger physical size of the audiophile cap is an actual detriment (though to be fair, a small one). In some circuits, the large size could potentially create more degradation by unwanted stray coupling to other parts of the circuit, so this is in that sense a best case. Nonetheless, if one is to claim audible improvements here, the claim is even more extraordinary since it involves spooky signals undetectable by instruments with resolution and sensitivity several orders of magnitude better than human ears, using test signals far more demanding than music.