Who are you, who are so wise in the ways of science?

What do we ask of the driver stage? Concomitant with low output stage bias voltage requirement is low drive requirement. And here, the EL84 is truly a star. All it needs is roughly 11V peak (7.9VRMS). The input capacitance of a pentode connected EL84 is likewise quite low (about 20pF including likely wiring). We’ve already put in current-limiting resistors at the output stage grids. So we don’t need gobs of swing or current from the driver, just linearity. Again, our choice of a pentode stage is allowing all sorts of synergy to make a very clean, stable amplifier.

One very simple and common input stage topology is a triode or pentode voltage amp directly coupled to a split-load phase inverter. It has been used in several generations of amplifiers, and was so popular that special tubes were made with just this topology in mind (e.g., 7247, 7199). Feedback from the output transformer secondary is generally taken to the top of the input stage’s cathode resistor.

This type of driver has much to commend it: excellent balance over the desired frequency span, low parts count, and only one set of capacitors and RC time constants between the input and the output. Gain can be an appreciable portion of the first tube’s amplification factor, or nearly twice as much as one can get from a differential amplifier connected as a phase-splitter.

If loaded identically at plate and cathode, its balance will be nearly perfect, guaranteed by Professor Kirchoff. The effective source impedances at plate and cathode with symmetrical loading are forced also to be the same. It is a less-than-unity gain topology, but with an associated input tube direct coupled, it can achieve a greater overall gain than a differential amp like a long-tailed inverter (which is limited to less than one half the mu). But it does transfer all responsibility for linearity to the first stage, which must swing the entire output stage drive at low distortion. The tube choice here will be critical.

When we think “linearity,” we think “6SN7,” or ought to, anyway. It’s an excellent tube, but has a rather low mu. This means that we will have great difficulty applying any feedback around the amplifier, something vital when pentode output stages are used. We will reluctantly look elsewhere. The 12AX7 has plenty of gain, but questionable linearity and extremely weedy driver characteristics. Nonetheless, it can be made to work well, if not optimally. I’d like to do things more optimally.

A good choice is the ECC88/6DJ8. This was the tube chosen by Morgan Jones for the Bevois Valley EL84 amp shown in his classic text, “Valve Amplifiers.” The mu is higher than the 6SN7’s, and the tube has good linearity. But I think we can do better.

The 12AT7/ECC81 is a perfect example of a solution in search of a problem. Its poor reputation notwithstanding, it is a tube eminently suited for swinging moderate voltages with excellent linearity. In my measurements of a range of 12AT7s in common cathode topology with a current source as a plate load, I found that at 30V peak-to-peak (10.6VRMS), the distortion was consistently below 0.1% with a favorable distribution of harmonics. For the best specimens, THD was less than 0.03%, even with a source impedance of 1 megohm. This bested any ECC88 variant I have tested, confirming the wisdom of this choice. What’s more, these top-grade ECC81/12AT7s were from new production (JJ), easily available, and relatively inexpensive (well under $10). Given the fine intrinsic linearity of the 12AT7 as a voltage amp and its high mu of 53, we may have found a use for this excellent tube.

I would not wish to compromise the driving ability of the split-load phase-splitter, and the 12AT7 is no slouch here, either. An equally good choice is the 6SN7 or its Loctal equivalents. I did not go that route here for three reasons. From the esthetic standpoint, I’m using 9 pin miniature output tubes. So I’d like to also use a 9 pin miniature driver if that doesn’t compromise performance. From an availability standpoint, there are no new production 6SL7s available (to my knowledge), meaning that one is limited to the uncertain and expensive NOS market. And since there ARE excellent 12AT7s available fresh, our choice is clear. However, as before, if you’ve got a stash of 5691s and 5692s, and the room for octal sockets, I won’t argue with their use. The third deciding factor for me is the two triodes per envelope in the 12AT7; hey, it’s there already, it’s too convenient NOT to use. That lets me use totally separate tubes in the two channels, improving crosstalk.

Here is the signal circuitry: 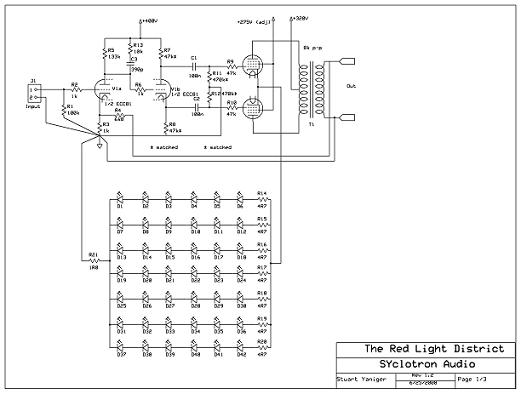 Let’s go through and map out a set of component values and voltages.

Starting at the beginning, the 100k value of input resistor is arbitrary, but a reasonable value. Likewise, the grid-stopper’s value isn’t critical (anything between 1k and 10k will do), but it is important to place its body physically close to the tube’s grid pin. A carbon composition resistor in this position is generally preferred to more exotic types; I’ve seen a recommendation of an SMD resistor placed right on the grid pin, and it makes sense, but I haven’t done so. Follow the dictates of your conscience.

Tests showed that 12AT7s connected as grounded-cathode voltage amplifiers were very linear at 1.8-2.0mA standing current. Distortion spectra validate the notion that 120k or so is a good value for a plate load, and for the targeted voltage swing at full throttle, the plate voltage should be at least 100V. Higher would be better, but we will run into cathode-to-heater voltage limits in the split load section. The plate voltage requirements force a supply of 350V or more, well above the maximum ratings for the output tubes. This is the previously-mentioned hidden problem; with the supply voltage higher than we’re going to need for the output stage, we’re looking at a separate supply for the driver.

We could in theory piggyback a booster supply onto the output stage power supply to get the extra voltage, but that will be nearly as expensive as a separate supply and require VERY careful attention to insulation requirements. But with a low current requirement, a separate supply is not an expensive task. Regulation is also not needed, since the drivers will be kept strictly in class A and the exact voltage isn’t critical, taking reasonable power line variations out of the picture- this is another advantage of this approach as compared to a booster supply arrangement, which will bounce up and down with varying output stage current. And we gain a stability advantage: direct-coupled stages such as our driver are often prone to low frequency instability or motor-boating. This is generally triggered by the output stage causing the power supply to sag a bit under full drive. This sag, transmitted to the driver supply and then on to the driver stage, is analogous to a mallet striking a bell. With the mallet and bell placed safely in separate rooms, we can sleep in peace.

The first stage will, with a 350-400V supply, have a plate voltage of about 110-125V (let’s call it 110V for these calculations). This will place the cathode voltage of the split load stage a few volts higher. A 47k cathode load will cause this stage to run at something over 2mA, a good value for linearity. The plate resistor, also being 47k, causes the total effective load of this stage to be about 94k, again an excellent operating point for linearity. The plate voltage will then be about 250V, so the tube has 250-112V = 138V across it. And the high degeneration in an already-linear stage will take the distortion down to ridiculously low levels.

Since the output stage only needs 11V peak to reach clipping, the first stage’s plate will swing from about 99V to 121V, which largely keeps the tube in its sweet spot. Testing confirms this- at the required 11V peak swing, the distortion from the driver stage remains below 0.05%. That can be reduced a bit further by going up on the supply voltage; in this circuit, anything up to 400V will work fine. To bias the first stage properly, a bit of fiddling with load lines suggests a cathode resistor of something less than 900R. Now, since the effective DC cathode load consists of the cathode resistor in parallel with the feedback resistor, this combination must equal the required value. Constraints here will need to include the required gain, which is a strong function of the ratio of the feedback resistor to the cathode resistor in parallel with the source impedance of the tube cathode.

There are two ways to arrive at the component values for the feedback and cathode resistors. The right way to do it is the Engineering Way. In the previously-mentioned Bevois Valley circuit, Jones did a rigorous calculation of the component values considering the required feedback and parallel resistance for DC purposes; after slogging through a great deal of tedious algebra, he was able to specify those values precisely. As an educational experience, I would urge you to read his treatment and do the algebra. Being far lazier than Mr. Jones, I cheated, and guessed at the resistor value. I will attempt to explain my thought process in the hopes of making you a better guesser.

First, I’ve targeted a gain of 6. My eyes were open that this does not have to be terribly exact- if it were 5.8 or 6.5, that’s just a notch or two difference on my volume control. A bit high is better than a bit low unless your preamp goes to 11.

Second, if the amp had infinite open loop gain, the closed loop gain would be simply the ratio of the feedback resistor to the cathode resistor. The amp does not have infinite open loop gain, so the feedback resistor will be somewhat greater than six times the value of the cathode resistor, Using Kentucky windage, a value of seven times could be pretty close to correct. Hmmmm, say I, how about 6k8 and 1k0, two standard values? In parallel, they equal 880R, about what we need for biasing. On the bench, the closed-loop gain turned out to be almost exactly six and the driver biased up exactly as predicted. Damn, I’m good.

OK, let’s clean up a few more details. I’ve added a shorting switch across the input resistor to allow the inputs to be muted if we want to plug or unplug a source while the amp is on. I hate bangs and buzzes.

The RC series network across the first stage’s plate resistor was chosen to set a dominant pole for feedback stability. This amp will NOT oscillate or otherwise misbehave when run without a load or with heavily reactive loads. The values might have to be tweaked a bit if you use a different output transformer than I did. See part 4 for details.

Note that the cathode of the 12AT7 phase-splitter will be elevated by something more that 100V. In order not to torture the heater-cathode insulation and tempt fate, the heaters are floated up above ground by 20% of the rail voltage. This also has the salutary benefit of eliminating hum in the first stage caused by heater-cathode emission by reverse-biasing the virtual diode formed by the heater and cathode.