You’ll recall the data I posted here demonstrating that the voodoo hypothesis that dielectric absorption in coupling caps causes distortion in audio signals doesn’t stand up to either first principles or actual experiment. One of my Faithful Correspondents told me that the voodoo guys are now either ignoring actual data or suddenly changing their claim. “Coupling caps aren’t important, it’s the feedback cap that’s important!” Now, from a basic theory point of view, that makes no sense either- the important thing is that the corner frequency is well under the audio range, no different than a coupling cap. But since audio lore and self-promotion seem to be more durable than Keith Richards and Twinkies, I suppose it’s worth ten minutes of my time to give the wrecked and ruined claims another shin-kick.

I grabbed the schematic for one of Nelson Pass’s designs, the Adcom GA555 power amp that has served me well over the past 3 decades. The feedback network is terminated with a 1k resistor in series with a 47u bipolar electrolytic cap- that corresponds to a corner frequency of roughly 3.4 Hz and seems pretty typical of the genre. I took the output of the trusty Audio Precision APx515 (set for 50R output impedance) and connected a capacitor to the input, then used a 1k resistor for a shunt. Nothing fancy about the resistor, it was a 2 cent special from Digikey. The capacitor was variously 50u polypropylene or two 100u electrolytics, back to back to form a bipolar cap. First I looked at the distortion spectrum of an 18Hz sine wave (that frequency chosen to allow the harmonics to be distinguished from 60Hz hum pickup). 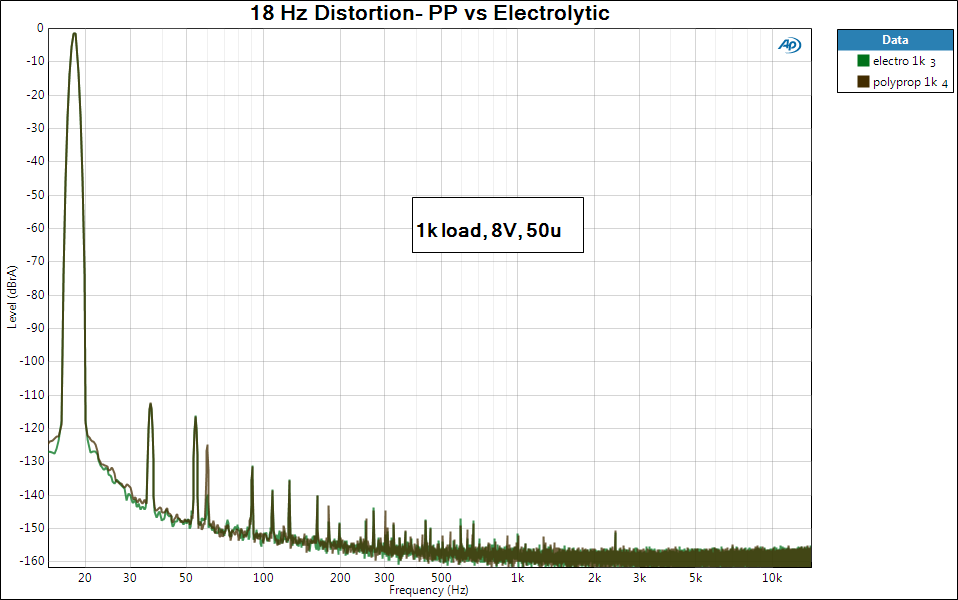 What about other frequencies? I ran a sweep of harmonic distortion versus frequency and it almost perfectly overlays with data I had taken with a slightly-under 10k load, also comparing an electrolytic with a film cap. 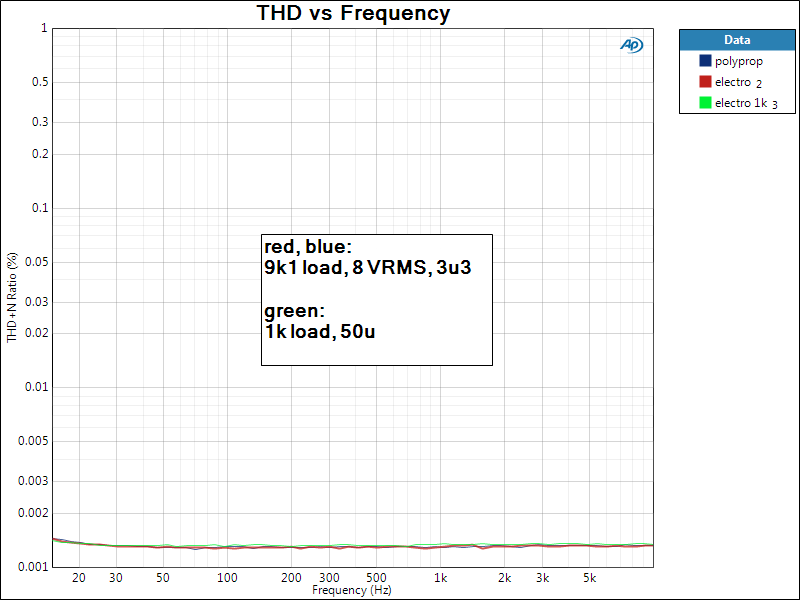 So under experimental scrutiny, the claim that a higher dielectric absorption capacitor has deleterious effects on distortion again proves to be untrue for coupling- and for feedback caps. The folks who insist that one needs anything special in these circuit positions have lots of assertion and exactly zero pertinent data to back up their claims. It’s sad that someone has to do something this basic to demonstrate what any competent designer already knew, but hey, that’s the world of “high end” audio.

It’s this simple: put the corner frequency below the audio band (which is necessary for flat frequency response anyway) and differences between non-pathological cap types goes away. The assertion that DA causes distortion in coupling caps and feedback caps not only makes no theoretical sense, it is demonstrably false.

Wonder where the goalposts will move next?

Addendum: at the request of one of the commenters, I’m adding another measurement, this a 32 tone cluster signal from the APx515 to look for intermods. Here’s the spectrum and an expanded view of a couple of tones to show the absence of intermods and sidebands. Note that the polypropylene is slightly inferior to the electrolytic in this application because of increased noise pickup. 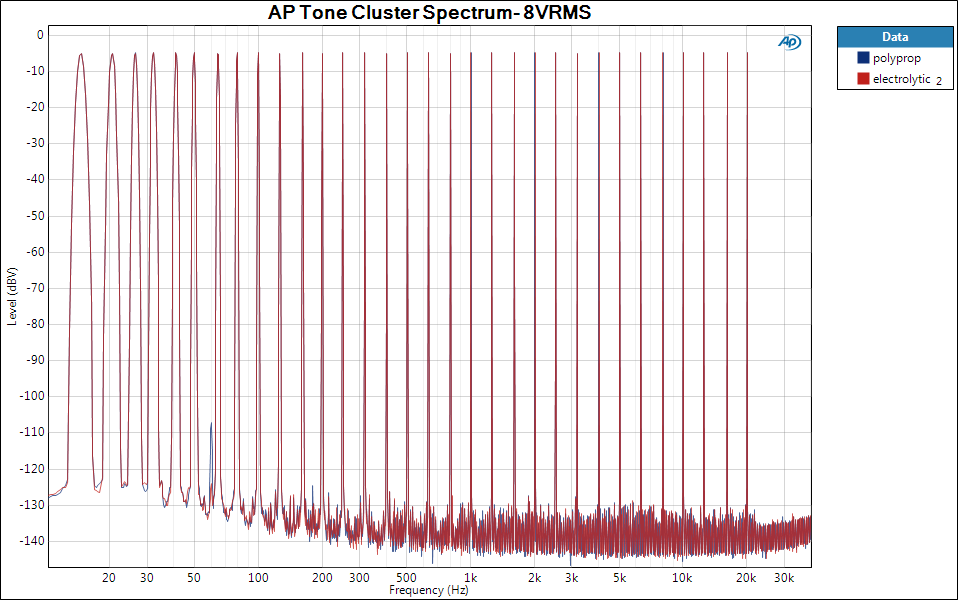